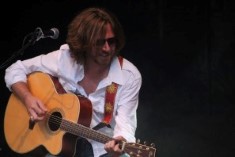 The Beatles had quite early big influence on his life and his music. Volker learnt to play the piano and guitar and began his musical career in 1979.

Volker and Claus Wissler created the studio project Magazine in 1987. Among others two absolutely brilliant, excellent pieces arose from this cooperation: “w. a. r.“ and “a time of life“! The recordings on this emerged each with several bands and singers. The title “w. a. r.“ deals with the first Iraq war, which took place in the years 1990/91

About “a time of life“ Claus Wissler once said himself: “… in my opinion one of the best pieces in rock history ever … ” – nothing has actually to be added to it! Among Fools Garden fans well known excerpts from this opulent composition, that were released on the album “Fool’s Garden”, are: “Scared” and “No flowers by request”!

Volker joined the course of studies in media technology at the University of Stuttgart as a latecomer in 1991 and became acquainted with Peter Freudenthaler there. Peter called this encounter later as “fateful“, “because so well the interaction previously worked with no one else”. In an interview (1) Peter continued:  “We found out that we both have a big weakness for music and that we have lived only 3 kilometers remotely from each other for childhood days, seen geographically. We started writing songs together and have also ascertained here relatively fast, that this works just fine. So it had to be really some kind of fateful encounter.”

First Peter took part in the project Magazine. Volker liked Peter’s songs and Peter was impressed by the quality of Volker’s demos. Thus originated the first common recordings of Peter’s songs “Sandy” and “Tell me who I am“. Volker had created a playback of a song (a version without music and text) which should become the first co-production of Hinkel / Freudenthaler – completely according to the model of Lennon / McCartney  – and this song was called “Lena”! From that moment on it was clear, that in the future all compositions are published under the name of both musicians.

The recordings, mixing and mastering of the songs of Fools Garden result, since 1991, among others in the studios of Hinkelstone Productions, a production company founded by Volker.

In 1992 Peter and Volker created some commercials for various companies from different industries.

Volker started his solo project HINKEL in 1993 and thus fulfilling the desire to realize his own ideas about music. The first album of HINKEL, which was released in 1994 and became re-released in 1996, is titled “In The Wake Of Thunder”.

However, Volker is not only an excellent musician, singer and songwriter, but for many years distinguishes himself also by the production of other artists. In 2000 he produced, e.g., the single “Under My Wing” of the band Brainstorm from Latvia, the album “Hope Garden” by Cae Gaunnt (Germany) and “Sister Moon” by Mira Kay (Germany).

Volker set up the independent label Lemonade Music together with Peter, in 2003. Almost at the same time also originated the mysterious brand The Laird Of John’O Groats, behind which no less than Volker Hinkel himself is hidden and with which he “signs” his work.

In 2003, Volker was involved in the album “Sensor”, as a guest star, and also in 2006 in “Relocated” which were both published by the German band Camouflage. In 2006 he toured with Camouflage through Germany and in 2007 through South and Central America. In the course of the years other common appearances followed, among others in Tallinn, in 2012.

Between 2001 and 2004 Volker produced another solo album in which from 2002 Dirk Blümlein (bass) and Claus Müller (drums) played a part  who belong since 2003 also officially to the anew formed band Fools Garden. The album titled “Not A Life-Saving Device” was published in August 2005 for the first time by Lemonade music.

The music of HINKEL can certainly be described as rock-pop with electronic influences and shows not only Volker’s preference for the Beatles, but is also strongly influenced by the music of other artists, such as U2, Oasis, Coldplay and also by The Who and even Sigur Ros.

Already in 2005 Volker has worked as co-author, arranger, guest artist and producer with Daniele Groff (Italy). In 2006, Volker then produced the first single from the young German Songwriter Yannic Günther, entitled “Nowhere”.

Volker also started a profitable web marketing campaign with HINKEL at MySpace, in 2006.  As a result the song “House Of Love” was selected, from the album “Not A Life-Saving Device”, for the soundtrack of the US film “The Other Side Of The Tracks”, appeared in 2008, which also became known under the title “The Haunting Of Amelia” (directed by AD Calvo; starring: Brendan Fehr, star of the TV series “Roswell”; further contributors: Shirley Knight and Chad Lindberg).

The two songs “Shine” and “Run”, also taken from the album “Not A Life-Saving Device”, were published in March 2008 in Italy –  under the indie label echophonic –  on the EP “The Big Eye”. This project was realized in cooperation with the Mirrors. The cover of the EP designed Andy, from Bluvertigo.

In 2009 Volker debuted with his solo project HINKEL in the historic “Scimmie”, in Milan, and released the EP “Heaven And Hell”, including an eponymous cover, originally by John Entwistle. Also included: A cover of “Baba O’Riley”, a live version of “Run” and the latest song “Speed”.

Volker was, also in 2009, part of the renowned jury of the „Music Think Tank“, together with great, international artists, like Morgan Fisher, Martin Moscrop, Roger O’Donnell and to many more.

Not only the occasional guest appearance of Volker at Camouflage but also the common work on various soundtracks connects Volker Hinkel and Heiko Maile. Heiko composed e. g. the film music to “The Wave” (2008) and “We Are the Night” (2010). Volker was involved in both projects as a musician and in “The Wave” also as a producer.

As in the first part, Heiko Maile has also written and produced the score music for the second part of the “Suburban Crocodiles”, in 2010. The soundtrack to the third part, which was shown in the cinemas in 2011, was composed by Christoph Zirngibl one hand and on the other by Heiko Maile and Volker Hinkel. The music for all three parts of the film was recorded among others in the Hinkelstone Studios. Volker was involved in all three parts also as a musician.

In October 2012 Fools Garden released their eighth album, titled “Who is Jo King?”. The instrumental “Are you Jo King?” originated in cooperation of Volker, Heiko and Peter who drew inspiration, on this occasion, by the movie “THE FOURTH STATE” (starring Moritz Bleibtreu). The soundtrack of this film, set in Moscow and directed by Dennis Gansel, flew from the pen of Heiko Maile.

Realizing new ideas and new projects – this was probably the driving force that finally led to the founding of the band M.I.N.E. The first EP of the formation around Volker Hinkel, Marcus Meyn and Jochen Schmalbach will be published on 17 February 2017.

By the way – Volker has begun to discover a new instrument for himself – the drums!

Sources:
From conversations with Peter Freudenthaler, in December 2012, and from personal contacts to Volker Hinkel.
Furthermore, from various texts, published on the Internet.