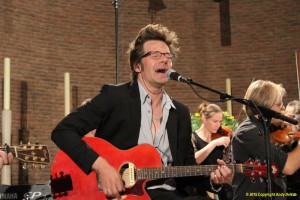 As son of an actor and a singer Gabriel came early on the stage.

At the age of 10 he played the first roles at a theater called “Theater der Altstadt“, in Stuttgart.

He held the first guitar in his hands at the age of 13 and began to play along to blues records of his parents.

After the high-school diploma Gabriel began an internship in the Jankowski sound studio which he broke off, however, early to go to Munich, to the MGI. Now it had also happened around the acting and the music became the absolute centre of his life.

At the beginning of his career he played in various Bluesbands, nevertheless, founded rather quickly his own bands, such as Seven Eleven and Space Choir, joined a little later the Helga Pictures and was also, together with well-known Dirk Blümlein, member of the band No Sports.

Occassionlly there have been small interludes again and again, among others with the Popstars winners Nu Pagadi, Anjaka or Bruder. Besides Volker Hinkel also Gabriel Holz has contributed some guitars and basses to the album “Relocated” (Camouflage).

From 2003 he strengthened, together with Dirk Blümlein and Claus Müller, the new formation of Fools Garden, around the band founders Peter Freudenthaler and Volker Hinkel. With Fools Garden Gabriel stood in numerous concerts on the stage and recorded also the the album “Ready for the real life”.

In 2007 he left Fools Garden, made a small musical break and returned to Berlin. After nine months it went but not without music, Gabriel founded, with Nader Rahy and Arne Augustin, the band Officer I’m High and also joined Mamasweed.

Because of love – how could it be otherwise – a move followed again to Stuttgart. There he began to play with the US singer Dacia Bridges, joined John Andrew’s Loudboy and founded his own project: Don Gabriele.

After a great Unplugged tour with Peter and Volker, in autumn 2014, the old love is aflame again and Gabriel is now again a permanent member of Fools Garden.

Sources:
From conversations with Gabriel Holz.