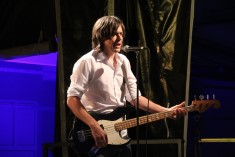 Dirk’s musical career began, at the age of 8 years, first at the flute. In 1979 he changed to the trumpet to discover, after another 4 years, what should become “his” instrument: the bass.

Between 1992 and 2002, Dirk was part of the ska band No Sports, which has released several CDs and toured throughout Europe.

From 1993 – 2000 he studied electric bass,at the Musikhochschule Stuttgart and received a diploma in jazz / pop.

In the period from 1996 – 2001 Dirk provided for sensation with the jazz band Mr. B´s Time Machine! Yet in 1996, the band was a finalist in the “Mercedes-Benz award for jazz and popular music” and finalist of the “16th European Jazz Competition 1997”, as part of the Leverkusen Jazz Days. Further members of the band were: Andreas Franke – saxophones, clarinet and Eckhard Stromer – drums.

Dirk joined the line-up of HINKEL in 2002. Volker Hinkel, Dirk Blümlein and Claus Müller recorded together the album “Not A Life-Saving Device”, which was published in 2005.

By the common work with HINKEL Dirk then became an integral part of Fools Garden in 2003, too.

Together with Volker Hinkel, Dirk was involved in the production of the song “Prendimi” the same year, which Volker has written for the Italian musician Daniele Groff.

Dirk supported Claus Müller – also in 2005 – with whose project mueller c and musically accompanied him during the recording of Claus’ first album, which was published the following year, under the title “sound trippin”.

With “IERS” the Dirk Blümlein Terzett contributed a song to the soundtrack of the film „We are the night”, which was to be seen in the German cinemas in 2010. Dennis Gansel directed, Heiko Maile (Camouflage) composed the soundtrack and Volker Hinkel was also involved in the soundtrack, as a musician.

Because change sweetens the life, as everybody knows, Dirk is now also part of another band called „M.A.D.“ which stands for “spontaneous groove music”. “Three letters, three instruments, three lunatics – without words! A trio of the first water. Various hits – also from own feather – are unpacked, packed in funky, gurgling, groovy and odd garments. So you should be there live when the gentlemen Meixner, Blümlein and Fillon light the fire.”

Differently expressed: „M.A.D. stands neither as an abbreviation for an engine part nor a Secret Service, but for the given names of three musicians: The trio of the same name from Martin Meixner (keys), Antoine Fillon (drums; formerly in Harald Schmidts Late-Night-Show-Band) and Dirk Blümlein (bass; also with Fools Garden).“

The first album of the trio, which was released in October 2012, describes something that is well acquainted with each of us: “immer ärger mit dem wagen (“always in trouble with the car”)!”

Meanwhile, Dirk Blumlein is considered “one of the most sought-after studio bassists in Germany.”

Sources:
By courtesy of Dirk Blümlein and from various texts, published on the Internet.