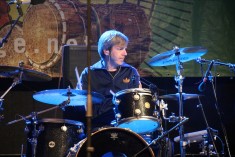 In 1979, Claus dabbled playing the drums for the first time – “because it was love at first sight” – while listening to the music of Suzi Quatro.

At a band contest he met Peter Freudenthaler in 1983 for the first time. Claus’ band emerged from this competition as a winner, however, Peter and his band had to be content with the 8th place.

Together with Joachim Schmid, Ortwin Befurt and Michael Schmid Claus founded the STURDY BLUES BAND in 1985, “a band of passion for the blues”!

From 1989-91 he visited the Frankfurt music workshop and finished a percussion degree, for jazz and pop music. Since that time he teaches at different youth music schools.

In the same year Claus toured through Germany and England, with the Beatles tribute band Hard Day’s Night. During this tour, the opportunity arose, to perform at the legendary “The Cavern Club”, in Liverpool!

He published his first CD titled „Geht ‘s noch schlimmer?”, with the band Schlechte Verlierer, in 1993. A member of this band was, among others, Marcus Breiteneder. Claus was at that time the band leader and songwriter of the band.

In the 90s, Claus had an engagement as a musician in the musicals at the City Theatre in Pforzheim and since 2001 he operates his own drum school, named DRUMBOX.

Over the years, Claus was active in many different bands, for example with the David Readman Band, EXP (Hendrixcover), Acoustic Project, ZAP-Gang or the percussion ensemble Rhythm Club.

He joined the line-up of HINKEL in 2002. Together Volker Hinkel, Dirk Blümlein and Claus Müller recorded  the album “Not A Life-Saving Device”, which was published in 2005.

Since 2003 Claus is an integral part of Fools Garden after Peter Freudenthaler had asked him, if he would like to join them. Before, Claus had already played a part in several live appearances, however, as a representative of Ralf Wochele.

In 2005 Claus realised his own project, under the name mueller c. Besides, musically he was accompanied by the bassists Dirk Blümlein and Michael Heise (among others Marcus Breiteneder Band). The first album, with the title “sound trippin”, was published in the following year.

Claus is indeed on the drums “at home”, but also plays “guitar, bass and keys”. And now and again FG fans experience him also as a singer!!

But also in the role as a compère and organizer Claus absolutely knows how to be convincing! Thus he took for the project „Jimi Hendrix becomes 70!“ a year of time to prepare everything thoroughly. The planning began in 2011. Eight well-known musicians, at the same time friends and long-standing companions of Claus, spontaneously accepted to be present with two concerts at the end of November (Gaggenau) and at the beginning of December, 2012 (Pforzheim). Among them: Peter Freudenthaler, Gerald Sänger (Sturdy Blues Band), Ali Neander (Rodgau Monotones), David Readman (Pink Cream 69), Michael Heise (Marcus Breiteneder Band) and more.

The nine musicians inspired on both evenings their audience sometimes acoustically, as Matthias Hautsch and Sandie Wollasch with their versions of “Remember” and „Castles Made Of sand“, sometimes rather softly, like Peter Freudenthaler with „May This Be Love“ and “Little Wing” and sometimes rather rough and rocky like David Readman, e.g., with „Hey Joe“. And as a “Maître de Plaisir” right in the middle: Claus Müller, who decisively contributed to the fact that both evenings became an unforgettable experience! (1)

Claus is now considered one of the best known and most popular drummers in the region and is currently, among others, except with Fools Garden, on tour with: Sturdy Blues Band, Blueprint, Zap Gang, Lady Sue & The Lounge Princes and Marcus Breiteneder Band.

End of 2014 Claus left the band, after more than 10 years together. We wish you, dear Claus, all the best!

Sources:
In agreement with Claus Müller.
Various texts, published on the Internet.